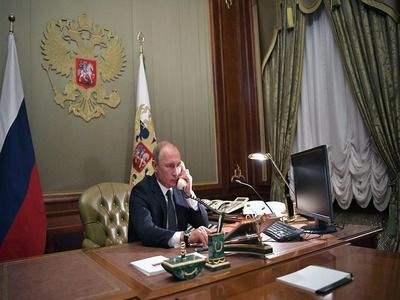 StateInterstate relationsMilitary securityEvents
OREANDA-NEWS. Russian President Vladimir Putin and his Turkish counterpart Tayyip Erdogan discussed the situation in Syria by telephone on Tuesday. This was reported by the Kremlin press service.

"The situation in the Syrian Arab Republic was examined in detail. Mutual concern was expressed over the aggravation of the situation in the Idlib de-escalation zone", the statement said. In the conversation, the necessity of strict implementation of the Russian-Turkish agreements on Idlib, which envisage building up joint efforts to neutralize extremists, was emphasized.

"Vladimir Putin drew attention to the sharp activation of terrorist groups, the attacks of which led to numerous casualties among the civilian population," the Kremlin noted. In this regard, the interlocutors agreed to take "urgent measures, primarily through the ministries of defense of Russia and Turkey, in order to further increase the effectiveness of coordination in Syria".

In addition, the parties reaffirmed their support for the inter-Syrian dialogue within the framework of the Constitutional Committee in Geneva.
Source: OREANDA-NEWS
Материалы по теме: