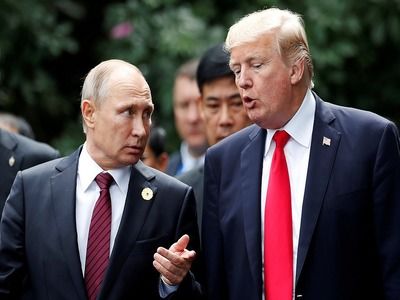 StateInterstate relationsMilitary securityTerritorial administration
OREANDA-NEWS. US intentions to deploy its new shorter-range missiles in Japan and South Korea are of concern to Russia. This was stated by Russian President Vladimir Putin at a meeting of the Council of CIS Heads of State.

The President of the Russian Federation once again emphasized that in general, the US withdrawal from the Treaty on the Elimination of Intermediate-Range and Shorter-Range Missiles (INF Treaty) "really worsens the situation in the field of international security". He noted that in 2002, withdrawing from the Treaty on the Limitation of Anti-Ballistic Missile Defense, the United States "made it simpler, without inventing anything, or putting the blame on Russia, they just got out".

“All the time we were accused of violating something, and three months after the exit (from the INF Treaty) the United States tested a medium-range missile. This suggests that they did it a long time ago, because you can't do this in three months the product, it’s necessary to work on it for years. They worked, went to it, withdrew from the contract and tested it in three months", Putin said.

The Kremlin Answered the Question about the Preparation of the Meeting Between Putin and BidenOreanda.ru | 13.05.2021 13:22:11

The Search for the Missing Former Chief Doctor of the Omsk Hospital Where Navalny Was Treated Has ResumedOreanda.ru | 10.05.2021 10:33:10