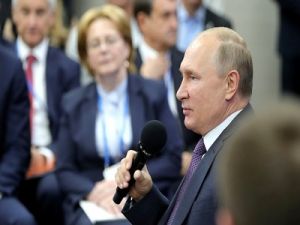 OREANDA-NEWS. German business expects to discuss implementation of ongoing projects and planned investments in the Russian economy at a meeting with Russian President Vladimir Putin in Sochi on December 6. This is stated in a statement released on Thursday by the Eastern Committee of the German Economy.

"As in previous years, the delegation of the committee will consist of 20 representatives of the most important - large and medium - sized German investors in Russia", the document says, received by the Russian media in response to a request to comment on the upcoming meeting. As emphasized, Russian ministers responsible for the economy and investments will traditionally take part in it.

"Current German projects and planned investments will be discussed", the committee noted. They reminded that the meeting was originally scheduled for December 9, but in light of the fact that the Norman Four summit will be held in Paris that day, it was rescheduled for Friday.