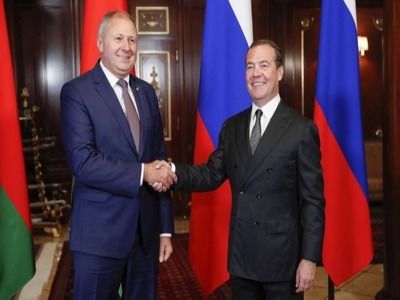 StateInterstate relationsInternational activitiesWholesale of non-motor vehicles
OREANDA-NEWS. The economic integration program of Russia and Belarus, approved by the cabins of both countries, suggests the possibility of switching to a single Tax and Civil Codes, a common foreign trade regime, as well as a single regulator of the oil, gas and electricity markets. This was reported on Monday by the Russian business newspaper, citing a document agreed upon by the prime ministers of the two countries, Dmitry Medvedev and Sergey Rumas. The correspondence of the publication’s information to the document was confirmed by the press secretary of the Prime Minister of the Russian Federation Oleg Osipov.

It's noted that the integration plan includes mutual cancellation of roaming from June 1, 2020. "The document doesn't discuss the merger of issuing banks and a single currency, but the central banks and the finance ministries of the two countries intend to agree on harmonization of macroeconomic policies, unification of currency controls, unification of payment systems and, at least in part, a unified regime of investment protection". Also, by 2021, countries plan to provide mutual unified access to public procurement, a unified system of property accounting and the unification of economic legislation. Since January 2022, two states within the Union State also intend to pursue a coordinated policy on the labor market and in the field of social protection, ensuring the approximation of the level of social guarantees.