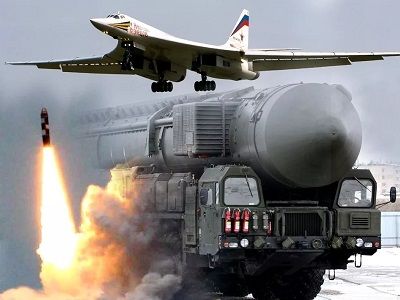 Russia held large-scale exercises of the strategic nuclear forces. About it reports "Interfax" with reference to the Ministry of defence.

During the exercise, training and combat launches of ballistic missiles of submarines, air-launched cruise missiles and aircraft guided missiles were carried out. The launches were carried out from the waters of the Barents and Okhotsk seas, as well as long-range aircraft that rose from the airfields of Engels, Ukrainka (Amur region) and Shaykovka (Kaluga region).

The exercise involved on-duty shift of control points, crews of missile regiments, the crews of nuclear submarines of Northern and Pacific fleets, strategic bombers and long-range bombers HQs. It is specified that the exercises of the strategic nuclear forces involved ground, naval and aviation units, as well as missile warning systems.

During the exercises, the control system of the Armed forces was tested, as well as the passage of combat training orders from the national control center to the command posts of the formations. "The unified space system and ground radar stations detected all launches of ballistic missiles of submarines in a timely manner," the defense Ministry stressed.

"The tasks of the exercises have been completed in full," the Ministry said. Educational goals were amazed at landfills Cura, Canary, Pemba and Terekta.