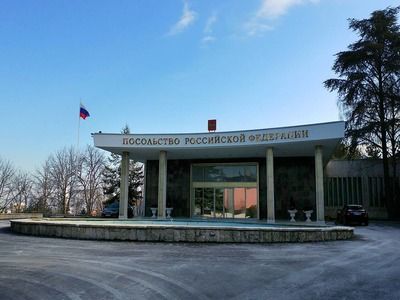 StateMinistries and departmentsDiplomatic organizationsInternational activities
OREANDA-NEWS. Turkish authorities have stepped up measures to ensure the security of the Russian embassy in connection with threats to Ambassador Alexei Yerkhov due to the aggravation of the situation in the Syrian province of Idlib. This was reported on Friday to the correspondent of the Russian media by the press attaché of the Russian diplomatic mission Irina Kasimova.

"Yes, indeed, the situation has recently worsened. In connection with this, at our request, the Turkish authorities have taken additional security measures", she said. According to Kasimova, some are threatening with the words: "Ambassador, do not go to the streets of Ankara". “We understand that the people who write this are unlikely to go to kill, that they thereby throw out their anger. But we nevertheless have to reckon with this”, the press attaché added.

The situation in Idlib sharply worsened after the Russian and Turkish military made another attempt in January to introduce a regime of silence, but the terrorists only intensified their attacks. As a result, military experts from the Russian Federation and Turkey died. The Syrian army retaliated against extremists, taking on February 5 the city of Sarakib near Idlib.

On February 10, Turkish President Recep Tayyip Erdogan reiterated the death of the Turkish military near Idlib. In response, the Turkish military attacked more than 120 targets of the Syrian army. Ankara also reported the transfer of additional units to the area. Earlier, consultations of Russian and Turkish military diplomats on Idlib had already been held in Ankara, in Moscow they count on continued contacts.
Source: OREANDA-NEWS
Материалы по теме: