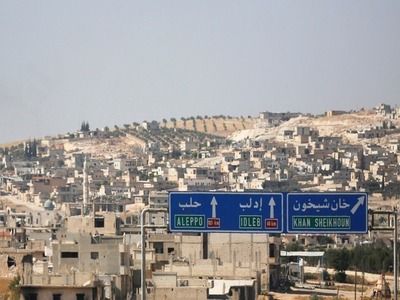 StateInterstate relationsMilitary securityMinistries and departments
OREANDA-NEWS. US actions on Idlib are perplexing and worrying. This is stated in a commentary circulated on Monday by the Russian Foreign Ministry in connection with Washington’s air strike in the Idlib de-escalation zone.

"Inconsistent and controversial US actions on Idlib can not but cause bewilderment and concern. On the one hand, American representatives from all the stands, including the UN, demand to stop the escalation of tension in Idlib, escalate passions in connection with the suffering of civilians, ignoring the unprecedented concentration of terrorists recognized - those of the UN Security Council. On the other, they inflict an air strike, which resulted in large-scale destruction and casualties", the diplomatic service said". The question arises: what is the American bomb s "better" and why the Russian terrorist targets US more "legitimate" than terrorist targets that were destroyed by Syrian government forces with the support of Russian aircraft?".

"Due to the current situation, we need to involve the assistance of humanitarian workers of the Organization, they will record and note all the events and consequences of the U.S. operations in Idlib in the preparation of their reports and will promptly inform the members of the UN Security Council about its consequences for civilians and civilian infrastructure, and for compliance with international humanitarian law", they added ministry.

The United States struck at 3:00 p.m. Moscow time on August 31 in the area between the settlements of Maaret Misrin and Kafer Khaya in the province of Idlib. According to a statement by the Russian Center for Reconciliation in Syria, the airstrike has led to numerous casualties and destruction. As the Russian military noted, the actions taken by the US violate all previous agreements, as Washington conducted the operation "without notifying the Russian or Turkish side of the planned actions". The Reconciliation Center emphasized that the United States jeopardized the continued maintenance of the ceasefire in the Idlib de-escalation zone, and foiled it in a number of areas.