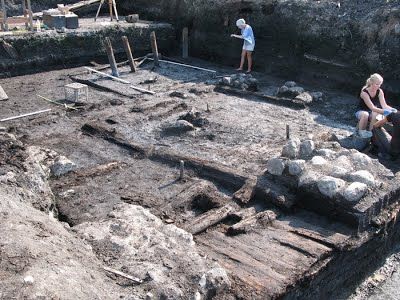 Sarcophagi Found During Excavations in Novgorod

OREANDA-NEWS. An expedition of the Institute of Archeology of the Russian Academy of Sciences for the first time discovered six stone sarcophagi during excavations at the Yuryev Monastery.  In the 12th and early 13th centuries, representatives of the boyar elite of Novgorod were buried in them.

"This is an unusual, rare burial structure, and its uniqueness is not only that stone sarcophagi are very rarely found - only about 15 sarcophagi have been found in Novgorod today. They are in St. Sophia Cathedral, in some old churches, but a whole series of sarcophagi  belonging to the elite of medieval Novgorod, is certainly a rarity, "said Vladimir Sedov, chief researcher of the Department of Medieval Archeology of the Institute of Archeology, head of the Novgorod architectural and archaeological detachment.

The first three years of research were carried out inside, and then archaeologists began to explore the perimeter outside.  This year, the eastern part of the southern facade of the cathedral was opened.