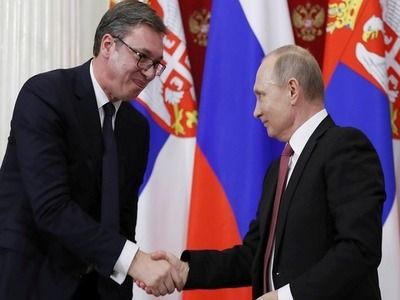 StateEventsMinistries and departmentsInternational activities
OREANDA-NEWS. Serbian President Aleksandar Vučić and Russian Ambassador to the Republic of Alexander Botsan-Harchenko discussed the possible visit of Russian Foreign Minister Sergei Lavrov to Belgrade, as well as the program for the visit of the Serbian President to Moscow to celebrate the 75th anniversary of Victory Day. This was announced on Monday by the press service of the Serbian leader.

"The interlocutors considered the program of upcoming visits: the arrival of Russian Foreign Minister Sergei Lavrov to Belgrade and the presence of President Vučić in Moscow to celebrate the 75th anniversary of Victory Day in World War II," the statement said. The parties also discussed the situation in Kosovo and Metohija, the press service noted.

According to her, Vucic conveyed congratulations on February 23 to Russian President Vladimir Putin. In turn, Botsan-Kharchenko conveyed to the Serbian leader the response of Russian Prime Minister Mikhail Mishustin to congratulations from Vucic on his assumption of office. Earlier, the Serbian president confirmed that he would come to visit Moscow to celebrate the 75th anniversary of the Victory. In addition, 75 Serbian soldiers will take part in the Victory Day parade on Red Square on May 9.
Source: OREANDA-NEWS
Материалы по теме: