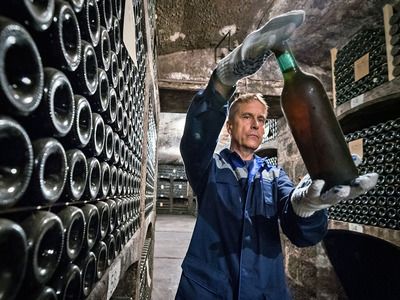 Supplies of Russian Wine to Ukraine Increased by almost 50%

StateFood product manufactureWholesale of non-motor vehiclesInternational activities
OREANDA-NEWS. In 2019, Russia increased its wine exports by 15.3%, to 6.4 million kg, according to calculations by the Russian media on the basis of data from the Federal Customs Service. In monetary terms, supplies abroad of grape wines (including champagne and fortified wines), as well as grape must, increased by 14%, to $ 8.5 million.

The increased export of Russian wine was discussed at a meeting at the Ministry of Agriculture last week, said Leonid Popovich, president of the Union of Russian Winegrowers and Winemakers. The materials of the Ministry of Agriculture available to the Russian media include figures where liters are taken as the basis. According to these data, officials' plans for wine export were overfulfilled last year: 4.3 million kg of grape wines worth $ 9.5 million were delivered abroad, with the expected $ 7.8 million.

Last year, Russian wine exports grew primarily thanks to Ukraine, follows from customs statistics. In 2019, she delivered 2.9 million kg of wine (plus 47%) for $ 3.2 million (plus 52%). According to the Ministry of Agriculture, the supply of wine from Russia to Ukraine in kind increased last year by 62%, up to 3.2 million kg.