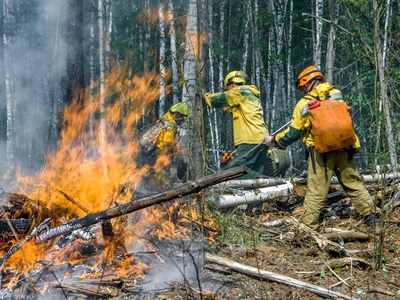 The Area of Forest Fires in Siberia Decreased by 1.2 Million Hectares

StateIncidentsMinistries and departments
OREANDA-NEWS Firefighters extinguished 355 forest fires with a combined area of 1.2 million hectares in three regions of Siberia and the Far East. This was reported by the press service of the Ministry of Emergencies with reference to the First Deputy Minister Alexander Chupriyan.

According to the agency, from July 30 to August 9, the area of active burning decreased to 96 thousand hectares. In addition, since the beginning of the month, the number of settlements falling into the smoke zone has decreased by 4.5 times. Eight forest fires raging in the five-kilometer zone from several settlements are Under the special attention of the emergency department. To protect them, an air-mobile rescue group was involved, which included about 700 people and 40 pieces of equipment.

The most difficult situation was recorded in the Boguchansky district of the Krasnoyarsk Territory, as well as in two districts of the Irkutsk Region. According to the press service of the Irkutsk department, due to forest fires raging in the region, as well as in neighboring Buryatia and Yakutia, 103 settlements in eight regions fell into the smoke zone over the past day. Atmospheric pollution observation posts are organized. No cases of high and extremely high pollution have been identified.