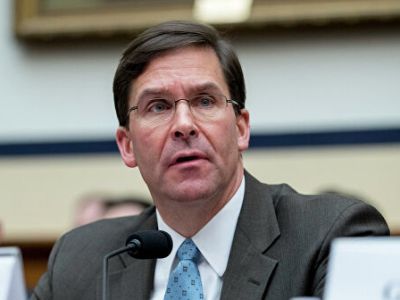 US Doubled Funding for the Development of Hypersonic Weapons

OREANDA-NEWS. US Secretary of Defense Mark Esper said Washington had doubled funding for the development of hypersonic weapons.

“The Department nearly doubled its long-term investment – almost 5 billion more in [Fiscal year. – Ed.] 2020 – for hypersonic weapons alone over the next five years. Our 2021 budget will be even stronger,” the politician said during a speech at the Center for Strategic and International Studies in Washington. He noted that the Pentagon accelerates flight tests and other experiments in the development of hypersonic weapons.

At the same time, Esper thinks that competition between world powers in the development of hypersonic weapons cannot be considered to be an arms race. However, he acknowledged the presence of competition in this area and called for increasing America’s efforts in developing this type of weapons.
Source: OREANDA-NEWS
Поделиться в соцсетях:
Подписаться на наши группы: Instagram | VK | Facebook | Twitter
Rate this article: