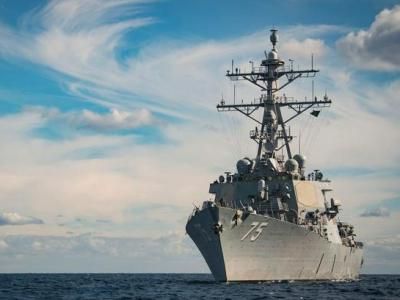 US Explained the Entry of a Destroyer into the Black Sea

OREANDA-NEWS. The command of the US Sixth Fleet explained the entry into the Black Sea of ​​the missile destroyer Ross with the desire to maintain security in the region.

According to the statement published on February 23 on the website of the US Navy, Ross began its strait transit to conduct maritime security operations and enhance regional maritime stability and naval capability with NATO allies and partners in the region.

The Operation Atlantic Resolve launched in 2014 under the aegis of NATO after the return of Crimea to Russia and the onset of the crisis in southeastern Ukraine. The programme supposes regular entries of US warships to the Black Sea.

The destroyer Ross passed through Bosporus on February 23. Russian military are tracking its movement. According to the Montreux Convention, ships of non-Black Sea countries can stay in the Black Sea for no more than 21 days.
Source: OREANDA-NEWS
Поделиться в соцсетях:
Подписаться на наши группы: Instagram | VK | Facebook | Twitter
Rate this article: