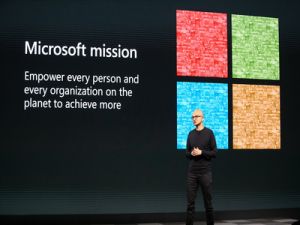 OREANDA-NEWS. Microsoft net profit rose by 49%. This follows from the quarterly financial statement of the software developer. The adjusted net profit, which takes into account a one-time tax of $ 2.6 billion, added 21%. Microsoft's revenue in the last quarter increased by 12% and reached $ 33.7 billion. Corporate profit from operating activities amounted to $ 12.4 billion, which is 20% more than the same period last year. The company's adjusted earnings per share are $ 1.37. FactSet analysts predicted $ 1.21.

For Microsoft, the 2019 fiscal year ended June 30th. The company called the results a record.

Two-digit growth has been recorded in most Microsoft business lines, including the LinkedIn network, sales of the Windows operating system, Surface devices, and Xbox consoles. Perhaps the only weak point in the quarterly reporting of Microsoft was the game segment. Sales fell by 10%, in part due to the boom of the game Fortnite, released a year earlier.

The growth of Microsoft is especially impressive against the background of the enormous size of the company and the relatively slow growth of competitors Amazon and Alphabet, writes the American newspaper. In early June, it became known that Microsoft will join forces with Oracle to weaken Amazon’s position in the cloud computing market.