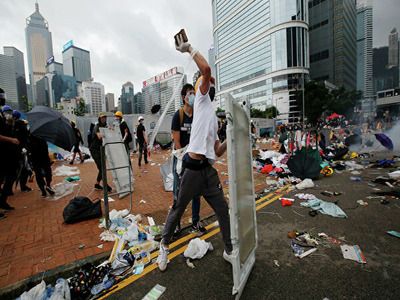 IT, MediaPublic order and securityMinistries and departmentsInternet media
OREANDA-NEWS. Singapore Minister of the Interior and Justice, K. Shangmugam, accused foreign media of spreading one-sided information about the riots in Hong Kong. With such a statement, the head of the department made on Monday in parliament.

"The media, especially foreign ones, presented a one-sided picture, which often came down only to criticism of the police", he said. According to him, "the protesters in the press have always been democratically inclined, presented exclusively in a positive manner, law enforcement officers seemed to always come up with a cruel answer".

In June 2019, mass protests began in Hong Kong against the intention of local authorities to pass an extradition bill that would allow extradition of offenders to mainland China. Despite the recall of this legislative initiative, opposition supporters continued anti-government protests. They were periodically accompanied by road blockages, violence, arson and acts of vandalism.

In total, the police since the beginning of summer have detained more than 7 thousand participants in the riots. Since mid-November, the situation in the city as a whole has returned to normal, rallies began to decline and began to take place more and more peacefully.
Source: OREANDA-NEWS
Материалы по теме: