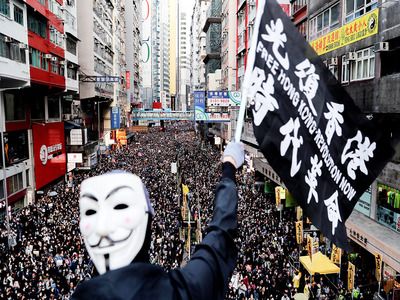 IT, MediaInternet mediaPublic order and securitySocial associations
OREANDA-NEWS. The British newspaper Financial Times (FT) chose in one word in 2019 the phrase Be water, which became a kind of motto for protests in Hong Kong. The “Be Water” advice gained popularity in 1971, when in one of the episodes of the series “Long Street” it was given by the hero of Bruce Lee.

In the spring of 2019, protesters in Hong Kong, where Bruce Lee lived and died, adopted the same motto. In their confrontation with law enforcement, protesters imitate water in its various forms. At the beginning of the action, they “condense” in various places, like dew, to block the road or surround a building, when the security forces appear, they are ready to disperse like fog or leak through the streets like water, but if necessary they can resist, becoming hard as ice.

FT notes that participants in other protests, from Spain to Chile and Lebanon, began to apply the “be water” tactic developed in Hong Kong in 2019.
Source: OREANDA-NEWS
Материалы по теме: