Picks and highlights from the new Cal Performances season 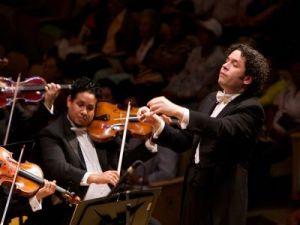 OREANDA-NEWS Single-ticket sales for the 2017-18 season of Cal Performances go on sale at noon today (and there are season packages to consider as well). Overwhelmed by choice? Berkeleyside has pored over the program and chosen our favorite performances in each of the season’s principal categories. Your mileage may vary, but we hope here’s a good starting point for your own exploration.

Full disclosure: I grew up with the Chicago Symphony Orchestra. While my peers can remember the lineup of the 1969 Cubs, I can name all the section principals of the CSO. So it goes without saying that the three October CSO concerts conducted by Riccardo Muti top my list. One slight quibble is that the programming is orchestral warhorses top to bottom: two Brahms symphonies, Schubert’s Unfinished, Bruckner’s Fourth Symphony, Schumann’s Second, Mozart’s clarinet concerto, and Rossini’s Overture to William Tell. Oh, and a West Coast premiere of Elizabeth Ogonek’s All These Lighted Things.

There’s much more interesting programming from the thrilling Valery Gergiev and the Mariinsky Orchestra in November. Richard Strauss’ Don Juan is the only non-Russian work in the two programs. Two works by Prokofiev – the second piano concerto and the Sixth Symphony – Schedrin’s second piano concerto, Shostakovich’s Ninth Symphony, and Scriabin’s Third Symphony.

Two recitals stand out. Our era’s great lieder master, Ian Bostridge, sings his signature work, Schubert’s Winterreise, on November 10. Bostridge has performed the song cycle over 100 times and two years ago published a book about what he frankly calls his “obsession.” In May, the Norwegian pianist Leif Ove Andsnes has a varied program with Sibelius, Nielsen, Beethoven’s Tempest sonata, and Schubert.

The Joffrey Ballet launches of three seasons of residency at Cal Performances in November with two $5 dance classes and a free public forum, as well as three performances with works by Justin Peck, Nicolas Blanc, Alexander Ekman, and Annabelle Lopez Ochoa.

The pioneering French early music ensemble Les Arts Florissants under the direction of William Christie come to Cal Performances in November to perform two works composed in the 1680s: Purcell’s Dido and Aeneas and Charpentier’s Actéon. You can leap nearly 350 years by going to the Kronos Quartet concert in March. The quartet is performing a fully staged collaboration with composer Jonathan Berger and novelist Harriet Scott Chessman revisiting the massacre of hundreds of unarmed Vietnamese villagers at My Lai (the 50th anniversary of the massacre will be marked two days after the concert). The quartet plays with theater artist Rinde Eckert and Vân-Ành Võ on a variety of traditional Vietnamese instruments.

When President Obama went to Argentina last year (oh, it seems so long ago), he gamely did a bit of tango in the presidential palace, the Casa Rosada. In November, Tango Buenos Aires brings Argentina’s iconic cultural export to Zellerbach Hall. Their performance is an homage to the most prominent and adored figure in the history of tango, Carlos Gardel. In jazz, Cal Performances brings young star Cécile McLorin Salvant to the stage in February. According to The New York Times, she has “perfect pitch and enunciation, a playful sense of humor, a rich and varied tonal palette, a supple sense of swing, exquisite taste in songs and phrasing, and a deep connection to lyrics.” The repertoire includes familiar jazz standards, forgotten folk songs, and rare blues tunes, plus her own unique compositions.

Cal Performances has established a strong tradition of boundary-pushing theatrical productions. This season, two stand out. The Théâtre de la Ville from Paris returns to Berkeley with State of Siege, “a distorted mirror of a nightmarish future in which a city is reduced to silence and submission to authority,” based on Albert Camus’ political allegory. The performance is in French with English supertitles.

In May, Robert Lepage will perform his latest work, 887, a one-man show, amplified by the technical wizardry of his production company Ex Machina. The production employs everything from archival film footage to shadow puppetry to dollhouse-like miniatures of entire city blocks – creating an elaborately shifting psychological landscape that connects personal history to broader questions of collective memory.

The season kicks off in September with conductor Gustavo Dudamel leading the sensational National Youth Orchestra of Venezuela in a concert at the Greek Theatre. They’ll perform Prokofiev’s Fifth Symphony, followed by music from Dudamel’s Fiesta project, which has spawned short works by North and South American composers. Towards the end of the season, in April, Cal Performances returns to the Greek with an uncharacteristically pop event: the Boston Pops Esplanade Orchestra celebrating 22-Grammy award winner John Williams. Think scores from Star Wars, Jaws, Superman, Indiana Jones and more.