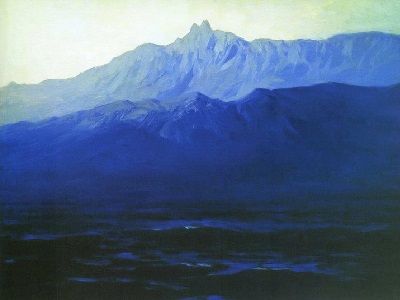 Kuindzhi Painting was Found After the Abduction from the Tretyakov Gallery

OREANDA-NEWS Picture of Arkhip Kuindzhi "Ai-Petri. Crimea", discovered  in the suburbs after the stolen. According to preliminary data, it is not damaged. About this reported in law enforcement.

"Previously, it condition is normal," the source said, adding that the picture in the criminal case will be material evidence.

Picture of Arkhip Kuindzhi "Ai-Petri. Crimea" was stolen on Sunday from the Tretyakov gallery, where was the exhibition of works by the artist. As reported by the official representative of the Ministry of Internal Affairs of Irina Volk, unknown removed from the wall of one of the halls of the canvas and fled from the scene.  According to a source in law enforcement, two people participated in the theft. He added that visitors and Museum workers did not pay any attention to these people.

Eyewitnesses reported that the hall where there was a picture, surrounded after it became known about its loss. One of the visitors noted that people who were in the Museum were allowed to see the exhibition (it lasts until 21:00). "At about 16: 30 the picture was still in place," - also told the visitor.

Ministry of Internal Affairs and FSB detained a suspect in the theft in the village of Zarechye, Moscow region. They were 31-year-old man. He hid the picture on the territory of the object under construction in the Odintsovo district, where it was seized by the police.

The suspect in December 2018 was detained by the Metropolitan police for drug possession and is a defendant in a criminal case under article 228 of the criminal code, and was under a recognizance not to leave. The police do not exclude that he had accomplices, they are now being installed.

Earlier, a source in law enforcement said that the picture is likely to be stolen to order. The interior Ministry also reported that,"according to preliminary data, the crime was committed out of selfish motives."