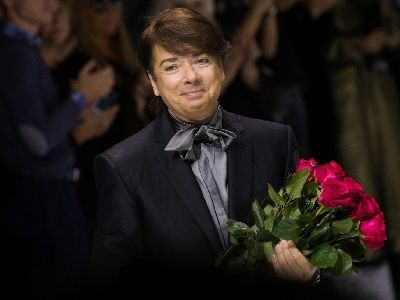 OREANDA-NEWS  Russian President Vladimir Putin awarded designer Valentin Yudashkin the order "For Services to the Fatherland" III degree. The relevant decree was published on Thursday on the official Internet portal of legal information.

"For the achieved labor successes, active public activity and long - term conscientious work to award with the order "for merits before the Fatherland" of the III degree of Yudashkin Valentin Abramovich-Professor of the Department of the Federal state budgetary educational institution of higher education "Russian state University. A. N. Kosygin (Technology. Design. Art)," the document says.

Valentin Yudashkin is a Russian fashion designer, folk artist of Russia (2005). He was born in 1963 in the village of Bakovka, Moscow region, studied at the Moscow industrial College in the field of "history of costume" and "Makeup and decorative cosmetics". In 1991 he founded Valentin Yudashkin fashion house. Yudashkin teaches at the Russian state University. A. N. Kosygin at the Department of "costume Design".

The President also awarded Deputy Chairman of Vnesheconombank Natalia Timakova with the order of Alexander Nevsky "for the achieved labor successes, active public activity and long-term conscientious work". In addition, Ambassador extraordinary and Plenipotentiary of the Russian Federation to the Republic of Guinea and the Republic of Sierra Leone Alexander Bregadze was awarded the distinction "for impeccable service" XL years.

More than 100 Russian citizens received various state awards and honorary titles, including for their achievements in space exploration, success in the spheres of economy, education and medicine.

Reasons for Meghan Markle's Refusal to Travel to Great Britain at the Invitation of Queen Elizabeth II RevealedOreanda.ru | 10.02.2021 15:23:18