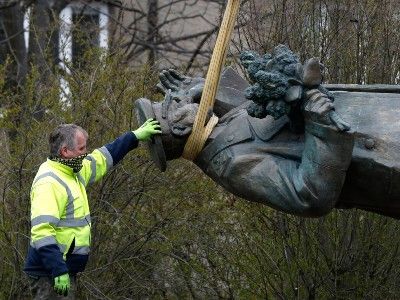 OREANDA-NEWS. Local authorities decided to remove from the pedestal a monument to Marshal of the Soviet Union Ivan Konev, which was erected on Interbrigady Square in the Czech capital Prague.

This was reported by the district press secretary Ondrej Sramek. The official said that the city council made this decision in September last year. According to him, the sculpture will be moved to the storehouse, and then it will become a part of the exposition of the Museum of the 20th Century.

Earlier, the monument to Marshal Konev became the object of attack by vandals several times. Due to the contradictory attitude of the Czech population towards the activities of Konev, in August 2018 the municipal authorities decided to change the plaque on the monument, indicating both information on the marshal’s involvement in the liberation of the Czech capital from the Nazis and the suppression of the Hungarian uprising in 1956 and the deployment of troops to Czechoslovakia in 1968. Despite this, in September 2019, the council of deputies of the city district decided to move the monument to the museum.

Czech President Milos Zeman called the decision of the municipal council a disgrace for the country. He noted that Konev is a symbol of the soldiers of the Red Army who died during the liberation of Czechoslovakia.
Source: OREANDA-NEWS
Материалы по теме: