Program “Evening with Vladimir Putin” Will Appear on the BBC 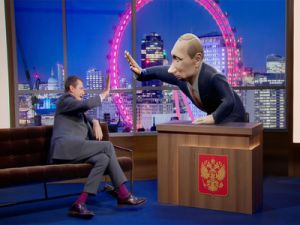 OREANDA-NEWS.British public entertainment channel BBC Two announced the launch of a comedy talk show, which will lead the animated "Vladimir Putin." The program will be aired under the title "Evening with Vladimir Putin". The channel's message predicts that a new show (the exact time of the program being broadcast will be announced later) will soon become world famous, denoting "the final victory of Vlad, the leader of the free world".

In the promotional video of the program, posted on one of the BBC's Twitter pages, the animated three-dimensional "Putin" (using its motion capture technology) admitted that none of the "great victories" he had won earlier happy, since the greatest of victories — the ability to host the most popular British talk show — has always eluded him so far.

“Watch out for Graham Norton, I'm on my way!” Ends Putin, referring to the host of one of the most popular talk shows in the UK, The Graham Norton Show, going on BBC One. To date, two pilot issues of Evening with Vladimir Putin have been filmed, in which the cartoon host will meet and talk with real people. Among the first guests of "Putin" will be the former press secretary of Tony Blair, the journalist Alastair Campbell and the writer Deborah Francis-White.

Judging by the comments in social networks, residents of the UK divided into two camps when discussing a TV program with Putin - some reacted negatively to the announcement of the Air Force, others welcome the comedy show with the President of the Russian Federation. Previously, TV presenter Vladimir Pozner said that Western propaganda is making a colossal mistake by regularly speaking negatively about Putin. In his opinion, such frenzied criticism only rallied the Russians more around the president.