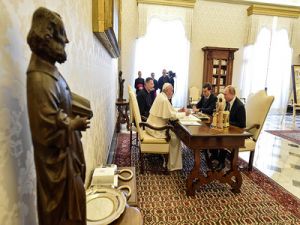 OREANDA-NEWS. Pope Francis greatly appreciates the classics of Russian literature - the books of Leo Tolstoy and Fyodor Dostoevsky. Russian President Vladimir Putin spoke about this at a dinner with the participation of representatives of the Russian-Italian Forum-dialogue of civil societies in Rome. Transcript posted on the website of the Kremlin.

During lunch, Italian Prime Minister Giuseppe Conte mentioned that Italians are very fond of Russian art and literature. “Probably, there is not a single Italian who was left without feelings of love for Russian literature, for works of great, famous Russian musicians or artists, sculptors”, said Conte, stressing that this allows Italy and Russia to be “close to each other”.

“The Pontiff allowed me to say publicly that one of his books, which is always on his table, is a classic of Russian literature, this is both Dostoevsky and Tolstoy”, Putin answered. According to Putin, such an attitude to Russian literature speaks of common deep spiritual roots among Italians and Russians, and explains the success of joint cultural events.

The meeting between Vladimir Putin and the Pope took place on July 4 in the papal library of the Apostolic Palace of the Vatican. The conversation between the Russian president and the pontiff lasted about an hour, and at the end of the meeting they exchanged gifts. Putin gave the Pope a disk with Andrei Konchalovsky's film “The Sin”, which tells about the life of the Italian artist and sculptor Michelangelo, a photo album from the shooting of this film, as well as an icon depicting the apostles Peter and Paul.

Pope Francis presented the President with return gifts: an engraving overlooking St. Peter's Square by Giuseppe Vazi in 1774, a message for the World Peace Day 2019 and a medal in honor of the sixth year of the pontificate dedicated to the 100th anniversary of the end of the First World War.