Surkov Allowed a “Zeroing” of Presidential Terms after Changing the Russian Constitution
State, 26.02.2020, 12:42 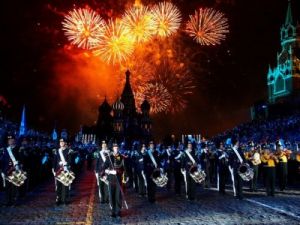 OREANDA-NEWS. Thirty military orchestras, ensembles and guard of honor companies from Azerbaijan, Belarus, Egypt, Italy, Kazakhstan, China, North Korea, Norway, the Republic of Korea, Russia, Turkey and Japan will perform at the XII Spasskaya Tower International Military Music Festival, which will be held from  August 23 to September 1 on Red Square in Moscow.  This was announced by the commandant of the Moscow Kremlin, Lieutenant General Sergey Khlebnikov.

Every evening, two Celtic bagpipes and drums orchestras and a Celtic dance team will perform in the square.  And to the accompaniment of the Central Military Orchestra of the Ministry of Defense of Russia, viewers will hear the singing of the People’s Artist of Russia Tamara Gverdtsiteli.

Before the opening of the festival, Sobyanin talked with representatives of Russian and foreign military bands, thanking them for creating a festive atmosphere in Moscow.