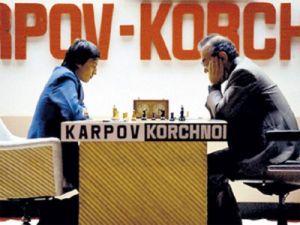 OREANDA-NEWS. Alexey Sidorov, director of the film “T-34” dedicated to tank crew during the World War 2, is going to shoot a new film about grand master in chess Anatoly Karpov. The living legend himself will be the main consultant of the film.

Today, the Cinema Foundation hosts presentations of leading domestic companies’ projects. The list shows that among nine participants there is not so much pitching of new projects - mostly filmmakers are asking for money for additional work. One of the fresh projects in this list is the film "World Champion", presented by Nikita Mikhalkov's Studio “Three T”. Apparently, inspired by the success of the sports drama "Moving Up," the studio decided to continue making films in this genre.

As producer Leonid Vereshchagin said, presenting the project, "sport is the backdrop for human stories." New movie will be dedicated to chess. The world champion in this sport, the legendary grand master Anatoly Karpov, will be its consultant. The director of the future film is Alexey Sidorov, already known to a wide audience thanks to the film "T-34". In his speech to the experts, the director recalled that there was practically no film made about chess, while the interest in the game was great in our country. Sidorov also recalled how earlier, after the “Vremya” (“Time”) TV-program, five-minute episodes about chess were broadcasted on television.

Stars will be engaged in the work on the film. For example, Konstantin Khabensky can play Viktor Korchnoy. Like it has been in the “Moving Up”, foreign stars will be invited to take part in the project. In this case, these are Eva Green and Mila Jovovich. They will be offered female leads. This approach greatly affects the promotion of movies abroad. The stated budget of the film is estimated at 350 million rubles. The Cinema Fund is asked for most of these funds. The film is scheduled to release on screens in 2020.