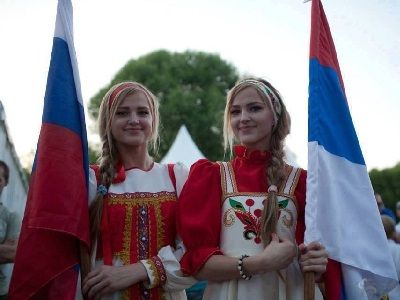 OREANDA-NEWS  Russian Minister of culture Vladimir Medinsky held a meeting with Serbian Russian students at the faculty of Philology of the University in Belgrade. The meeting was attended by several dozen people, the correspondent of from the scene.

During the meeting, the Minister asked students in detail about the curriculum of the Russian language and literature, foreign languages, favorite Russian writers. Russian cinema, popular Russian serials and films in Serbia were also discussed. Medinsky advised young Russians films and TV series, as well as works, which, in his opinion, is worth paying attention to.

The topic of translation from Russian into Serbian and vice versa was also discussed. The Minister offered the faculty to prepare 5-6 art translators for a year, for which a one-year internship will be organized in Moscow. In addition, the students were told about the Russian sites where you can get free access to both texts and audio and video products.

The economy has caused the study of the Russian language even in countries where it is not taught in schools, said the head of the Ministry of culture of Russia Vladimir Medinsky at a meeting with Serbian students.

Students expressed concern about the lack of Russian and Soviet film production. In response, the Minister offered a grant for the project of preparation of Serbian subtitles for Soviet and Russian cinema. "I suggest you take the films for which we have given the right, and prepare subtitles by your faculty. The Ministry will pay for it, it will be a paid practice for you," the Minister suggested. The idea was enthusiastically welcomed by students and teachers.

Answering the question of media about the upcoming 20th anniversary of the bombing of Belgrade by NATO forces, Medinsky said: "If it were now, then there would be no question of any bombing. It happened when the USSR was gone and Russia was gone." The Minister recalled that today in Syria all world forces look back at Russia. "And Serbia is much closer to us," Medinsky reminded.

The Department of Russian language of the faculty of Philology of the University of Belgrade is the leading in Serbia and one of the oldest in Europe. It began its work 140 years ago in 1878.