The Threat of Collapse of Notre Dame Cathedral Is Still Actual 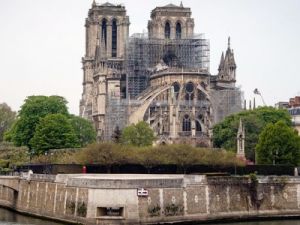 OREANDA-NEWS. Notre Dame Cathedral, damaged in a fire in April 2019, is still too fragile, and there is the possibility of further collapse of the building. This was told by the rector of Notre Dame Patrick Chauvet.

“Today we can say that there is maybe a 50 % chance that it will be saved. There is also 50 % chance of scaffolding falling onto the three vaults, so as you can see the building is still very fragile,” he said in an interview with Associated Press. “It will be out of danger when we take out the remaining scaffolding,” Chauvet added.

A major fire in the Paris Cathedral occurred on April 15, it lasted more than 12 hours. According to the Ministry of Culture of France, the building was saved from destruction. The prosecutor's office of Paris believes that an unquenched cigarette or a malfunction of electricity was a cause of the fire.