Ukraine Has Banned Participation in Eurovision for Children Performing in Russia 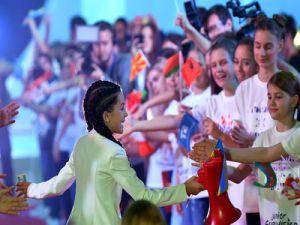 OREANDA-NEWS. The National Public Television and Radio Company of Ukraine (NPTU) has changed the rules for the qualifying round of vocalists for the Junior Eurovision Song Contest. The corresponding document is published on the competition website. Now, children who performed in Russia from January 1, 2014 are strictly forbidden to represent Ukraine at a music competition. We are also talking about vocalists who currently perform on the “territory of the aggressor country” and participate in events organized by Russian state bodies.

It clarifies that if the participant of the qualifying stage hid the fact of concert activity in Russia, the organizing committee can remove it at any stage. Channel NewsOne, citing the press service of NPT, specifies that the decision to change the selection rules was made after the situation with singer Anna Korsun (Maruv), who performed in Russia.

In February, she withdrew her candidacy from participation in Eurovision-2019 from Ukraine, although she won the national selection. According to the singer, she didn’t want to "come up with slogans, turning the competition into a promo action of politicians." Later, two more finalists refused to represent Ukraine at Eurovision in Tel Aviv, after which the NPTU decided not to send a country's representative to the competition. “Junior Eurovision 2019 will be held in November in the Polish city of Gliwice.

Vice Prime Minister Vyacheslav Kirilenko said that the Verkhovna Rada should also adopt a law concerning "the specifics of the performance of tour and concert activities by Ukrainian performers in the territory of the aggressor state". Earlier, performers who took the first three places in the national selection refused to represent Ukraine at Eurovision.