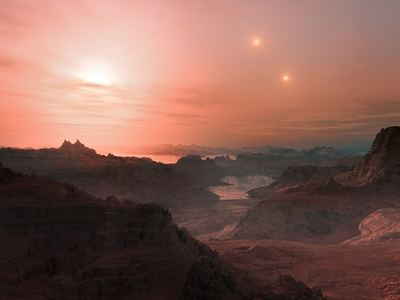 A Rocky Exoplanet with Three Red Suns is Discovered

Science and engineeringWorldResearch and development
OREANDA-NEWS NASA Astronomers discovered a rocky exoplanet with three red suns. The researchers found an unusual finding in their structure and properties using the TESS space telescope.

The planet, known as LTT 1445Ab, orbits around one of the stars of the triple system, all components of which are red dwarfs that are in the later stages of the life cycle, and the system itself is at a distance of about 22.5 light years from Earth.

After studying the data, scientists found that the planet is rocky, it is about a third larger than the Earth and at least 8 times more massive than our planet. An elevated temperature is maintained on its surface - about 160 degrees Celsius - and the planet makes one revolution around one of the stars of the system for 5 days.