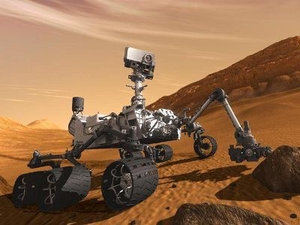 Found Evidence of Life on Mars

Science and engineeringResearch and developmentTechnical testings, researches and certifications
OREANDA-NEWS.NASA's 'Curiosity' Rover has detected a high methane content on the surface of Mars, which may indicate the existence of microorganisms on the planet.

NASA noted that the gas was released recently, as methane molecules can be in the thin-layer atmosphere of Mars for no longer than several centuries, gradually deteriorating under the influence of sunlight and chemical reactions.

It is possible that the gas could have been inside the planet for millions of years, and now began to come out through the cracks.

Methane as a metabolic product is produced by terrestrial bacteria, which are also called methanogens and which live in places where there is little oxygen: underground and in the digestive cycle of animals. However, methane can also be formed in reactions unrelated to biology.
Source: OREANDA-NEWS
Поделиться в соцсетях:
Подписаться на наши группы: Instagram | VK | Facebook | Twitter
Rate this article: