Hydrogen Tram Model will be Launched in St. Petersburg 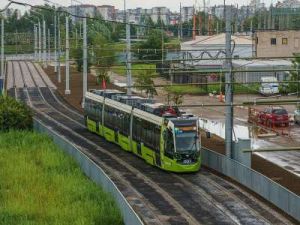 Earlier, on July 5, during a visit to the KGNTS by the acting Governor of St. Petersburg, Alexander Beglov announced the presentation of a tram project using hydrogen energy in August 2019.

The model of the tram is equipped with a new electricity generation system, which is based on hydrogen fuel cells.  In September, the tram will have to undergo sea trials on St. Petersburg routes.

“We equipped a tram with a factory electric motor with an autonomous power source, a fuel cell - a device that works on the interaction of hydrogen with air.  As a result of the physico-chemical process, an electric current is generated, which drives the transport.  An expensive contact network is not needed to operate a hydrogen fuel tram, running tests will be carried out on existing networks in the Moscow district without passenger service, ”said a company representative.