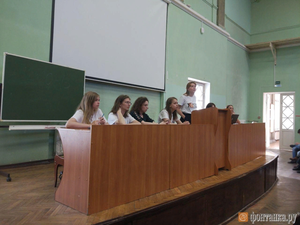 Science and engineeringStatePublic education
OREANDA-NEWS.Students of the Institute of History of St. Petersburg State University (formerly the history department of St. Petersburg State University) require the rector Nikolai Kropachev to stop the reduction of teachers and cancel innovations that, in their opinion, reduce training "to school principle" and "destroy science." Such provisions are contained in a petition adopted at the end of the student council meeting on June 25. The university management talks about optimization and sees no threat to scientific and educational activities. But the rebellion of historians is only the tip of the iceberg, students and staff object.

The reason for the dissatisfaction of students of history was the order 3773, issued by the leadership of St. Petersburg State University in April 2019. According to him, in the university, you can open only those elective courses for which at least 10 students enrolled. As the ex-head of the student council and member of the initiative group Vasily Kunin explained, there are about 80 such disciplines at the Institute of History, half of which are less than 10 people.

In the petition, students demand to stop "the vicious practice of merging departments under the guise of optimization" and reducing teachers' rates, and also to cancel the 3773th order. In the extreme case - to give a financial and economic justification for such optimization and in the future not to make fateful decisions without discussion with students and teachers.