Navalny Was Discharged from the Charite Clinic 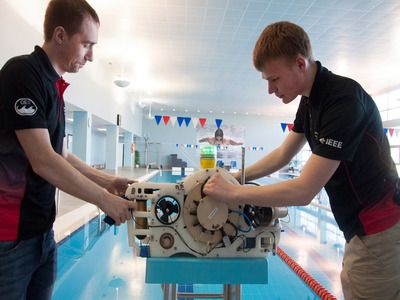 Science and engineeringSportResearch and developmentNew technologies
OREANDA-NEWS. The team of the Far Eastern Federal University (FEFU) and the Institute of Marine Technology Problems of the Far Eastern Branch of the Russian Academy of Sciences took second place at the 22nd international competition among autonomous underwater vehicles RoboSub-2019 in San Diego (USA). This was reported to the Russian media on Monday in the FEFU press service.

“In total, 56 teams took part in the competition, which is the record number in the entire history of RoboSub. In the conditions of fierce competition, the FEFU team and the Academy of Sciences confidently passed the qualifying stages and successfully performed in the final, ahead of the strongest and most experienced rivals. Today in the USA, the team was awarded from the eastern part of Russia took second place", the press service said.

As a member of the team, graduate student Alexander Pavin told the Russian media, the guys managed to repeat the success of two years ago, when they also took second place with the Junior underwater vehicle. But this time, the team designed a completely new robot.

“He was called Pandora, because from the side it looks like a box. At the championship it was the first device that looks like this. Of its features we can note two stereo vision systems, that is, two pairs of "eyes" in front and bottom, as well as a torpedo system. At the championship, only Pandora managed to hit the target as part of one of the tasks”, said Pavin.

Underwater robotics is one of the priority areas for the development of FEFU, which, in partnership with the Far Eastern Branch of the Russian Academy of Sciences, allows for the implementation of large-scale projects to study the resources of the World Ocean. In the field of underwater robotics, the university has international authority, which is confirmed by the successful performances of students and graduate students in world-class competitions.