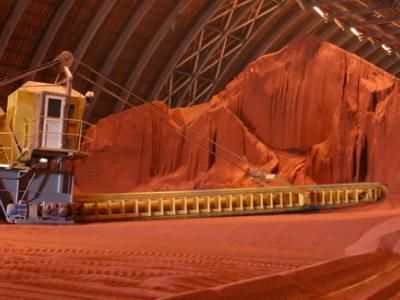 All commodity fertilizer sectors will face supply-side pressure in 2018

IndustryChemical manufactureFinances
OREANDA-NEWS. All commodity fertilizer sectors will face supply-side pressure in 2018 because of additional capacity that needs to be absorbed.

But of all products, potash could face the biggest challenge as MOP capacity looks set to significantly outweigh demand for years to come. Good news for potash buyers. Not so good for suppliers.

Several new mines have recently started production or will come on line during the course of 2018. Combined with expansions, these will add a staggering 13.5mn t of MOP capacity to a market that traditionally consumes 60mn-65mn t/yr with long-term demand growth a modest 2.5pc/yr. Long-term supply looks likely to rise by 3.8pc/yr, so there will be a notable surplus to place unless there is significant supply-side rationalisation.

MOP buyers have long complained about the lack of supply options available to them. Potash is a traditional market dominated by a few entrenched suppliers. Annual contracts set the price benchmark and spot prices, generally, move slowly. But is this about to change amid a shifting supply/demand dynamic?

Producers such as K+S, which recently started output at its 2.9mn t/yr Bethune mine in Saskatchewan, Canada are established features of the supplier landscape despite opening this new mine outside of Germany. But new entrants like Turkmenistan's Garlyk in 2017 and most notably Switzerland-headquartered EuroChem in 2018 will sharply change the supply picture, providing buyers with more options. The latter will eventually ramp up to 8.3mn t/yr of MOP. EuroChem is a major NPK producer and is likely to consume a substantial amount of its MOP internally, especially in the initial stages of production. But not all EuroChem's production will go to NPKs, so it will have to compete with other MOP producers soon enough.

Why is this relevant for Asia-Pacific? Asia is the largest consuming region, with four of the world's largest importers located here: China, India, Indonesia and Malaysia. In addition, there are significant markets in Thailand and Vietnam where imports are around 1mn t/yr. Much of this new MOP capacity will be focused on Asia, and suppliers will be working hard to secure market share in this key battleground.

This raises several questions. Will the changes shake up the existing domination of certain suppliers in Asian markets? What will be the role of Asian distribution channels going forward? Is the annual contract system in China and India sustainable amid rising supply-side competition?

In terms of price direction, 2017 has been a strong year for suppliers. Spot prices built slowly during the first half of 2017 and then both the China and India annual contracts settled higher mid-year, rising by $11/t and $13/t respectively.

Suppliers built on this and MOP has generally traded stable to firmer ever since. And the short-term outlook heading into the first quarter is for prices to rise further in Asia. Contract shipments will see a baseload of tonnes committed, and sellers will also be occupied executing awards under the current plantation tenders in Indonesia and Malaysia.

Robust demand has supported the gains in prices after a poor 2016. Indonesian imports look set for a record year in 2017, likely exceeding 3mn t. Imports have rebounded strongly because of more favourable weather and comparatively higher crude palm oil prices.

And this trend is not limited to Asia. Imports to Brazil, the world's largest spot market, look on course to top the previous record of 9.1mn t in 2014.