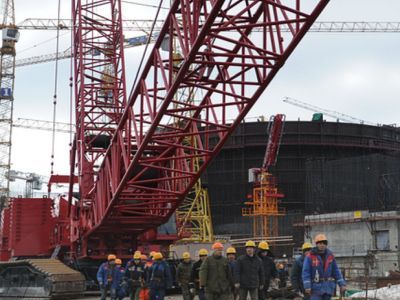 OREANDA-NEWS  India is soon expected to inform Russia of its choice for a second nuclear power plant site, a senior official involved in the project said today. This would be the second site after the Kudankulam Nuclear Power Plant in Tirunelveli district of Tamil Nadu. For the new site, there are plans to have new reactors of 1,200 megawatt or MW, which is an "evolutionary development" from the 1,000 MW reactor, Sergey P Orlov, Head of ASE Representation in India, said in a press conference.

"We are expecting the new site to be officially presented by the Indian side to the Russian side and we have been informed that it will happen very soon," he said. ASE Group is an engineering division of Russia's ROSATOM State Atomic Energy Corporation, which constructed Kudankulam Nuclear Power Plant or KNPP. It is involved in designing, supply of equipment and technical assistance for KKNPP.

"We have started the exchange with the Indian side about the type of plant we are offering but the choosing of the new site is 100 per cent prerogative of the Indian government and the Indian side."

"They are working on that and as soon as they finish they will make an official presentation of that site to us and we shall study the site together with the Indian specialists," Mr Orlov said.

The basic parameters that would go into the selection of the new site would include it being in low seismic zone and in an area that is not heavily populated. It should "preferably be on the coastal side" since the VVER reactor is a water-cooled one, Mr Orlov said.

On KKNPP's Unit 1, which started commercial operation in December 2014, he said it was going through its second scheduled shutdown and was expected to resume operation by the "first days of August".

The second unit will undergo a similar process in December this year, he said. It had started commercial operation in March this year. Mr Orlov said commissioning of the rest four units - 3, 4, 5 and 6 - was expected to happen in 2023, 2024, 2025 and 2026, respectively.

The construction work of units 3 and 4 of KKNPP started on June 29 with the ceremonial pouring of concrete. The General Framework Agreement for units 5 and 6 had been signed on June 1. To a question on localisation of equipment, he said it would happen more in units 4, 5 and 6.

When the rest of the units resume commercial operation, they will give a very substantial contribution to the power balance of India, Mr Orlov said. Responding to a question on the protests against the KKNPP by locals including anti-nuclear activists, Mr Orlov said such agitations happen everywhere. "It happens everywhere when it comes to nuclear power. The public does not fully understanding the nature of nuclear power, and of course will be cautions of having the plant next to their village; it is understandable," he said.

"As soon as the first unit started operating on a regular basis, providing so much power, the local population finally understood the benefits of having the plant nearby," he added.