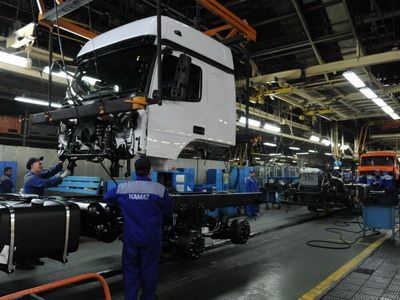 KAMAZ increases the quality of the products

Industry
OREANDA-NEWS. KAMAZ summed up the work on improving of the quality of 2016. Thus, in comparison with 2015, the number of defects per one proven vehicle (DPV) decreased by 24% and the ratio of defects (APA) – by 28%. In all the plants of the company there are continued to operate KVP-groups, involved in the identification and resolution of quality problems. The economic effect of the work of KVP groups exceeded 107 million rubles, the press service of KAMAZ.

Meanwhile, the order of the General Director of KAMAZ, Sergey Kogoghin, approved the program "Quality of 2017" and the quality objectives for the current year. Among the main tasks of the team of company in 2017 – there is a decline in the defects (APA) per the car by 10%, the number of defects per the vehicle (DPV) – by 20%. Requirements for vehicles of prospective families are designated tougher: it is planned to achieve a reduction of APA and DPV by 50% and 25%, respectively. In general, for the year KAMAZ intends to reduce losses from defects by 30%.

As previously reported "AUTOSTAT", by the results of 2016 KAMAZ produced 35,416 trucks and vehicle sets, which is more by 9%, or almost 3 thousand units more than the planned business plan. Among them, all-wheel drive and heavy family had more than 22 thousand units and more than 9.5 thousand - on the upgraded trucks. Assembly of the new flagship of the new model range of company - the main tractor KAMAZ-5490 - exceeded 1.5 times the planned figure and it was more than 2500 units.