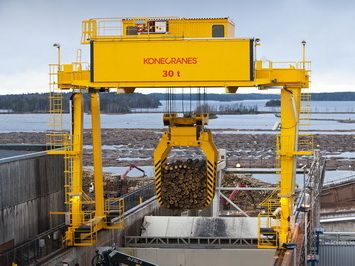 Industry
OREANDA-NEWS. Konecranes Plc’s Nomination and Compensation Committee proposes to the Annual General Meeting of Shareholders on March 23, 2017 that the number of Board members be eight (8).

The Nomination and Compensation Committee of the Board of Directors proposes that of the current Board members Mr. Ole Johansson, Ms. Janina Kugel, Mr. Bertel Langenski?ld, Mr. Ulf Liljedahl, Ms. Malin Persson and Mr. Christoph Vitzthum be re-elected for a term of office ending at the closing of the Annual General Meeting in 2018.

Of the current Board members Mr. Stig Gustavson and Mr. Svante Adde have announced that they will not be available for re-election.

All candidates, as well as Mr. David A. Sachs and Mr. Oren G. Shaffer, and the evaluation regarding their independence are presented on the company’s website www.konecranes.com. All candidates have given their consent to the election.

Compensation of the Board of Directors

The Committee furthermore proposes that 50 per cent of the annual remuneration be paid in Konecranes shares. The remuneration shares may be purchased on the market on behalf of the Board members at a price determined in public trading at the time of acquiring the shares or transferred in a corresponding number of treasury shares. The purchase of shares or transfer of treasury shares shall be carried out in four equal instalments, each instalment being purchased or transferred within the two week period beginning on the date following each of the company's interim report announcements and the company's financial statements bulletin for 2017.

In case the shares due in any such instalment cannot be purchased or transferred within the time period indicated above due to legal or other regulatory restrictions or due to reasons related to a Board member, the amount of annual remuneration due for payment in such instalment shall be paid fully in cash.

Konecranes is a world-leading group of Lifting Businesses™, serving a broad range of customers, including manufacturing and process industries, shipyards, ports and terminals. Konecranes provides productivity enhancing lifting solutions as well as services for lifting equipment of all makes. The Group has 18,000 employees at 600 locations in 50 countries. Konecranes class A shares are listed on the Nasdaq Helsinki (symbol: KCR).