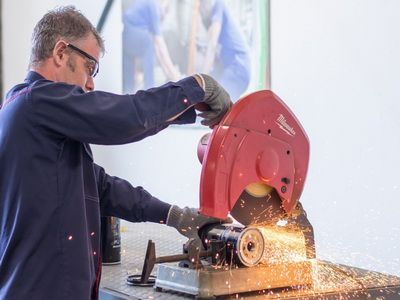 Scania and Ghana Police team up to combat counterfeit goods

How can customers differentiate between pirated parts and genuine Scania articles? The sad truth is that most cannot and are being misled. To further aggravate the situation, they are often paying the same amount for a substandard – and in some cases outright dangerous – product.

The markets of the Ghanaian capital Accra are overflowing with counterfeit products, which increasingly cause concern. Therefore, Scania recently teamed up with bearings manufacturer SKF and the Ghana Police Force to shed light on the growing problem. Hauliers and authority representatives witnessed a revealing exercise as Scania West Africa’s Service Manager David Roberts showed them three oil filter units, all nearly identical. “When I cut the tops off, the two counterfeit filters fell apart. Since they look almost exactly the same on the outside, you can’t tell the difference and customers are being ripped off.”

Scania established its own operations in West Africa three years ago but there have been plenty of older vehicles on roads. These owners have over the years relied on less scrupulous workshops for parts supplies. “They buy parts from container shops in markets that are manufactured in sheds or sweatshops somewhere in the world. What is most surprising is that the price difference with a genuine part can be as low as 1.50 euro. There is a misconception that Scania’s parts are expensive.”