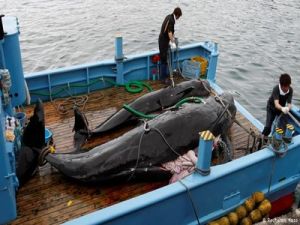 OREANDA-NEWS. The Japanese flotilla of five specialized vessels, headed by the Nissin-Maru flagship with a displacement of more than 8 thousand tons, departed on Monday from the port of Shimonoseki in the south of the country to fish for whales. She is going to mine 227 of these marine mammals for commercial purposes, according to the Japanese News Agency.

The Minister of Agriculture, Forestry and Fisheries of Japan, Takamori Yoshikawa, at a ceremony marking the release of the flotilla to the field, said that Tokyo would strictly observe its production quota. “At the same time, we intend to take measures to restore whaling”, he stressed. For the time being, fishing will be conducted only in the territorial waters of the country and its exclusive economic zone, but not in the waters of the Antarctic, where the Japanese flotilla may face opposition from environmental organizations.

On June 30, Japan officially left the International Whaling Commission (IWC), accusing it of prejudice. The country announced decision in December last year, for which it was subjected to sharp criticism from a number of states, including Australia. Then in Tokyo, they stressed that a scientifically established population of a number of whale species allows them to resume their commercial fishing. In addition, the government noted that the consumption of whales in food and the use of the products derived from them is part of the culture and life of the Japanese since ancient times.

In 1982, in accordance with the international moratorium, Japan ceased commercial hunting for whales, but then it partially resumed their fishing, motivating the decision by the need to study migration routes, diet and other factors associated with marine mammals. The meat of dead animals was sold to Japanese restaurants and supermarkets. At the same time, the demand for it drops sharply. In the 60s of the last century, about 200 thousand tons of whale meat were sold annually in Japan, and now its consumption has decreased to 5 thousand tons per year.