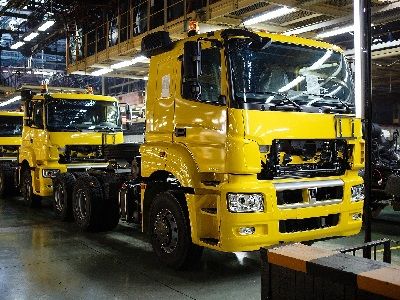 IndustryTransportTrade and servicesFinances
OREANDA-NEWS Russian automobile company "KAMAZ" and Chinese motor Corporation Weichai Power plan to sign an agreement. It will happened within the framework of the Eastern Economic Forum. The fourth Eastern Economic forum will be held on Russky Island in Vladivostok on September 11-13.

"KAMAZ" plans to sign two agreements on cooperation with the largest Chinese provinces. These information said Rustam Minnikhanov - the President of the Republic.

"Weichai is a partner of our large enterprise KAMAZ. I am sure that a serious agreement on the creation of a new joint venture will be signed within the framework of the Eastern economic forum," Minnikhanov said during the opening ceremony of the Chinese Consulate General in Kazan.

Tatarstan President also said that during the meeting with Chinese Ambassador to Russia Li Hui were discussed two agreements on cooperation between the largest provinces of China and Tatarstan. He sure, that they are also planned to be signed within the framework of the Economic forum.

"We will try to use the platform of the Eastern Economic forum as much as possible," Minnikhanov said.

Earlier, the Russian automaker "KAMAZ" has informed that carries on negotiations about prospects of cooperation with the largest Chinese motor Corporation, Weichai Power. "KAMAZ" has already raised the Weichai engines on their gas trucks. However, the volume of this partnership is small — about 1 thousand engines per year.

Weichai Power is one of the largest engine-building companies in China. For "KAMAZ", which does not export trucks in China, this is not the first attempt of cooperation with Chinese companies. For example, in September 2015, a framework agreement was signed with Hawtai Motor to create a joint venture for the production and sale of cars in Russia and China. It was planned that the manufacturer of Naberezhnye Chelny will begin Assembly at the Hawtai facilities, and the Chinese will master part of the auto giant capacity. But now the project is frozen, because the partner has not fulfilled part of the obligations under the agreement — has not received a license for the production of trucks.