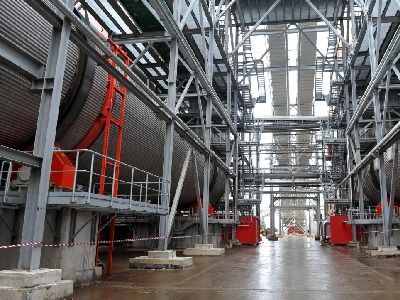 Private Company Will Invest 4 Billion Rubles in a Crimean Technopark

OREANDA-NEWS The company "Modern facade systems" plans to invest 4.2 billion rubles in the creation of the first private Technopark in Crimea, which will include a full-cycle plant for the production of aluminum profiles and a training center. The agreement on the support of the project will be signed at the Russian investment forum in Sochi, said General Director of the development Corporation of the Republic of Crimea Nail Gabbasov.

Technopark is created on the site of 2.5 hectares in Simferopol. The investor, who has been a member of the Free Economic Zone in Crimea since last year, plans to press foreign companies on the Russian market of facades and further export products to Belarus, Ukraine, Kazakhstan and other countries.

"For our part, we will accompany the project, assist in attracting additional funding for state programs and through funds. At the moment, the project is fully implemented for private funds of the investor, - said Gabbasov. - The plant plans to produce 18 thousand tons of aluminum profile per year".

Gabbasov specified that the Crimean investor company for the project at the end of 2018 acquired a site with a production complex, three shops and administrative buildings. In the first shop since March 2019 will work line of powder coating and rolling of warm aluminum profile, as well as equipment for its machining and finished products warehouse. In the second and third shops, which are currently under repair, will be placed foundry and extrusion (pressing) production.

Together with the Crimean Development Corporation, the investor will also open a training center in the Technopark on the use of energy-saving facade systems in construction. It will be located in the administrative buildings of the enterprise being repaired now. The center will train qualified specialists for the plant. In total, the company will create more than 300 new jobs with an average salary of about 45 thousand rubles.

The Russian Investment Forum will be held in Sochi on February 14-15 at the site of the main media center of the Olympic Park. The forum is a traditional platform for presentation of investment and economic potential of Russia. Last year at the forum in Sochi signed agreements 538 more than 794 billion rubles, in it participated more than 6 thousand people from 64 countries.