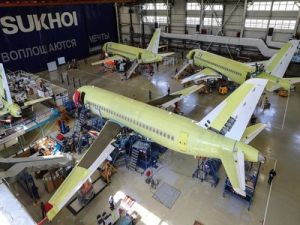 OREANDA-NEWS. Russia plans to offer Saudi Arabia Sukhoi SuperJet 100 aircraft in the VIP version and medium-haul MS-21 aircraft. This was announced by the Minister of Energy of Russia Alexander Novak at a meeting of the joint Russian-Saudi intergovernmental commission on trade, economic and scientific and technical cooperation. "We see great prospects in the field of industry and aircraft industry. We are ready to offer the Saudi side Sukhoi SuperJet 100 aircraft in VIP versions and medium-haul airliners MS-21", he said.

Earlier, Vice Prime Minister Yury Borisov said that the Sukhoi Superjet 100, which had an accident at Sheremetyevo, in which 41 people died, was fully operational. According to him, the liner can withstand an overload of 3.8 g, and during a state of emergency this figure was close to 6, which no design can withstand. Meanwhile, the MAC reported that they had already compiled a report on the causes of the tragedy, and in the near future the document will be published.

The cause of the crash of the Russian aircraft Sukhoi Superjet 100 at Moscow's Sheremetyevo airport, in which 41 people died, wasn't a technical malfunction of the liner - he was in good condition, said Deputy Prime Minister Yuri Borisov.