The Сonstruction of the Plant on Baikal was Suspended 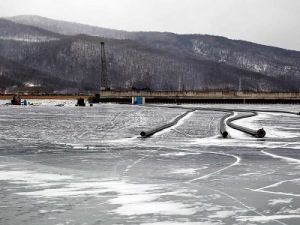 OREANDA-NEWS  The construction of a water bottling plant from Baikal in the Irkutsk region has been suspended, the press service of the regional government said on Friday.

"The construction of a plant for the production of drinking water in the village of Kultuk of the Slyudyansky district was suspended from March 15 until the elimination of violations revealed during inspections. The court granted the corresponding claim of the West Baikal Interdistrict environmental Prosecutor's office," the report said.

The construction affects the swamp, where red book birds stop during migration. Commenting on this, the representatives of the plant have told reporters that the stop position of the birds is only the pipeline of the water intake and this area will subsequently be reclaimed. However, during the survey of construction, the Supervisory authorities found traces of bottling of petroleum products, along the perimeter of the construction site - landfill waste. In addition, the owner of the plant did not provide permission to carry out excavation work to remove the soil for the trenches under the water pipes.

The plant builds the company "Akvasib", was in Irkutsk. Its main owner is the Daqing water company limited liability company "Lake Baikal" from China. The first stage of the plant was planned to be put into operation in December 2019, at full capacity it should be released in 2021 and produce 528 thousand liters of water per day or 190 million liters per year. According to "Aquasia", 80% of production goes for export and 20% for the Russian market.

On the eve of the Governor of the Irkutsk region Sergey Levchenko asked the Minister of Natural Resources and Ecology of the Russian Federation Dmitry Kobylkin to instruct the relevant departments to check the conclusion of the state ecological expertise for the plant construction project. The head of the region explained the need for this audit by the results of recent audits of the object under construction: the audit of the West Baikal Interdistrict environmental Prosecutor's office, the Rosprirodnadzor Department and representatives of the expert organization-the branch of "tslati for the East Siberian region" showed that the enterprise "Akvasib" violated the requirements of Federal laws "on environmental protection" and "on production and consumption waste".

Environmental expertise of the project in 2016 was conducted by the office of Rosprirodnadzor in the Irkutsk region, which issued a positive conclusion. Now prosecutors are studying the materials of the examination.

Earlier, the intention to check the legality of the construction of the plant was stated by Prime Minister Dmitry Medvedev, and state Duma Deputy Vladimir Burmatov with such a request addressed to the Prosecutor General's office.