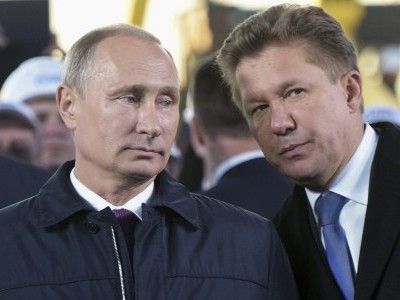 OREANDA-NEWS.  A working meeting took place between Vladimir Putin, President of the Russian Federation, and Alexey Miller, Chairman of the Gazprom Management Committee.

Alexey Miller briefed Vladimir Putin on the Company’s performance in 2016, focusing on gas production, domestic supplies and exports, and the implementation of the Russian Regions Gasification Program. The meeting also touched on gas deliveries to consumers in the current autumn/winter period and the development of the Yamal gas production center and the northern gas transmission corridor.

Vladimir Putin: Mr. Miller, let us talk about last year’s results and your plans for this year.

Alexey Miller: Mr. Putin, I can report that Gazprom produced slightly over 419 billion cubic meters of gas in 2016. Our domestic gas supplies grew by 2.3 per cent. I would like to note that an increase in gas deliveries was observed in the power industry, which is an essential sector of the Russian economy; consumer and household supplies added 5.7 per cent. The upward trend in power and gas consumption is indicative of the country’s economic growth throughout 2016.

Our gas exports to Europe hit a record in 2016, going up by 12.5 per cent and falling slightly short of 180 billion cubic meters. This is a historic high for the Soviet Union and modern Russia alike. On top of that, Gazprom’s share in the European gas market added 3 per cent in just over a year, reaching 34 per cent.

We can also see that the record-setting trend continues in 2017. Over the past two weeks, our gas supplies to Europe have steadily exceeded 600 million cubic meters per day. Mr. Putin, I am happy to say that today, on January 20, we have a new historic record for daily gas exports, as we exported 627.2 million cubic meters of gas yesterday, on January 19. That has never happened before.

Meanwhile, the Nord Stream gas trunkline is operating at maximum capacity. It has been conveying 167.4 million cubic meters of gas per day for over 10 days now, exceeding the design capacity by 11.1 per cent. We conducted tests and received technical approvals; the pipeline’s current capacity is even higher than the design one. This proves without a doubt that there is demand for the Nord Stream 2 project and that consumers are, of course, in favor of the project.

Gas is supplied to Russian consumers on a steady basis in this winter season. By the autumn/winter period, Gazprom injected the maximum possible amount of gas – 72.1 billion cubic meters. Our daily deliverability also set a record for the gas industry with 801.3 million cubic meters of gas. It should be noted that the temperatures during the autumn/winter peaks have been lower than the climate normal throughout Russia, as the past October, November and December were colder than usual for Gazprom’s consumers.

The Company does not even reach its maximum potential in gas production or gas withdrawal from UGS facilities while meeting consumption peaks during autumn/winter periods. We have an adequate reserve margin: our annual production potential exceeds the average annual output by 150 billion cubic meters of gas.

In 2016, we actively pursued gasification programs in accordance with your instructions. The Company built over 1,800 kilometers of gas pipelines and brought pipeline gas to over 270 Russian population centers, which increased the countrywide gas grid coverage to 67.2 per cent as of January 1, 2017. These efforts will continue in 2017 as well.

Vladimir Putin: What are your plans regarding the expansion of the natural gas network across Russia?

Alexey Miller: We plan to keep the rates unchanged. Last year, we allocated RUB 25 billion to finance gasification programs. Generally, we can, of course, allocate more and in the past the Company provided RUB 27, 29 and 30 billion in financing to that end. Naturally, it depends on the regional authorities, as the implementation of gasification programs falls within the framework of synchronization programs.

At present, we are working with the regional authorities to agree on a program through 2020 and we are close to completing the negotiations. The gasification results will be at the very least at the same level as in 2016. I hope they will be even better.