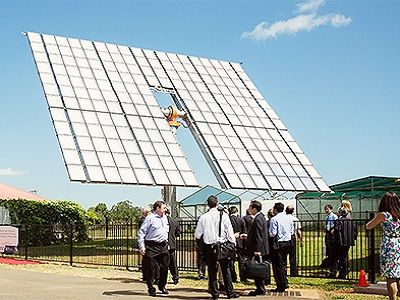 A state of Queensland in Australia has built an extensive power network to cover its vast land area. This significantly increases the state's burden of shouldering power transmission costs, thus creating high demand for distributed power generation systems. Furthermore, people in Australia have become more aware of the need to reduce reliance on fossil fuels as part of their efforts to make their society more environmentally friendly. Under these circumstances, the Queensland government has been staging a campaign to promote the use of renewable energy sources. In that sense, the country stands at the forefront regarding mega-solar power generation.

The country has large areas receiving high levels of direct solar irradiation, making it well suited to use Sumitomo Electric's CPV systems, which are advantages to high-radiation and high-temperature environments. In view of such weather conditions, the state of Queensland aims to raise the rate of power generation from renewable energy sources from the current 4.4% to 50% by 2030.