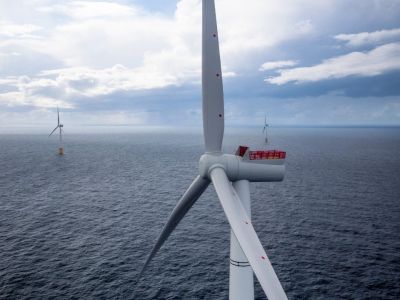 OREANDA-NEWS Despite one hurricane, one winter storm and wave heights of up to 8,2 meters, Hywind Scotland, the world’s first floating wind farm, performed better than expected in its first 3 full months in production.

The 30MW wind farm, operated by Statoil in partnership with Masdar, is located 25 kilometers offshore Peterhead in Aberdeenshire, Scotland, and is powering approximately 20,000 UK households.

During the winter, when the wind is at its strongest, the typical capacity factor for an bottom fixed offshore wind farm is 45-60%. By comparison, Hywind Scotland achieved an average of approximately 65% during November, December and January, i.e that the wind farm was producing 65% of max theoretical capacity.

A capacity factor of 100 % means all wind turbines have generated at maximum output every second of the day.

"We have tested the Hywind technology in harsh weather conditions for many years and we know it works. But putting the world’s first floating wind farm into production comes with some excitement. Therefore, it is very encouraging to see how well the turbines have performed so far. Hywind Scotland’s high availability has ensured that the volume of electricity generated is substantially higher than expected. In addition, it has delivered without any HSE incidents," says Beate Myking, senior vice president of offshore wind operations in Statoil.

Hywind Scotland’s first encounter with harsh weather conditions was the hurricane Ophelia in October when wind speed of 125 kilometers per hour (80mph) were recorded. These wind speeds were surpassed during Storm Caroline in early December when gusts in excess of 160 km/h (100 mph) and waves in excess of 8,2 meters were recorded.

Whilst the wind turbines shut down for safety reasons during the worst of these winds, they automatically resumed operation promptly afterwards. A pitch motion controller is integrated with the Hywind turbine’s control system and will adjust the angle of the turbine blades during heavy winds which mitigates excessive motions of the structure.

"Knowing that up to 80% of the offshore wind resources globally are in deep waters (+60 meters) where traditional bottom fixed installations are not suitable, we see great potential for floating offshore wind, in Asia, on the west coast of North America and in Europe. We are actively looking for new opportunities for the Hywind technology," says Irene Rummelhoff, executive vice president for New Energy Solutions in Statoil.

Statoil and Masdar are having an ambition to reduce the costs of energy from the Hywind floating wind farm to 40-60 €/MWh by 2030, making it cost competitive with other renewable energy sources.
"This is an ambitious, but realistic target. Optimised design, larger and more efficient turbines, technology development and larger wind parks will drive down costs, improve infrastructure and logistics," Rummelhoff says.