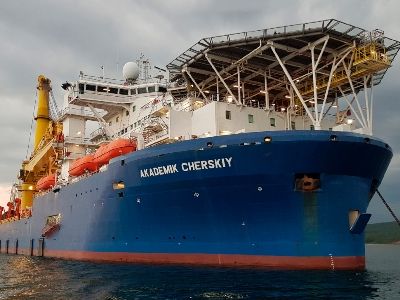 A Vessel Capable to Complete Nord Stream 2 Headed to Egypt

Fuel and energygasTransportWater transport and ports

OREANDA-NEWS. The ship Akademik Chersky, owned by a subsidiary of the Russian company Gazprom, headed to Port Said (Egypt). This follows from the data from the portals Myshiptracking and Vesselfinder.

The only vessel in Russia capable of completing the construction of the gas pipeline Nord Stream 2 began a journey from the port of Nakhodka in the Far East in early February. The vessel went to Singapore, and at the beginning of March she changed course to Suez (Egypt), where she was supposed to arrive on March 25.

On April 18, the ship was in the port of Las Palmas in the Canary Islands. She is expected to arrive in Port Said on the night of April 30.

In mid-February, Gazprom announced that it would launch Nord Stream 2 at the end of 2020. In December last year, the United States imposed sanctions against contractors for the building of the pipeline. As a result, the main contractor, Swiss company Allseas suspended work in Denmark. Due to the lack of vessels that are able to complete the pipeline, construction was delayed.
Source: OREANDA-NEWS
Материалы по теме: