Подпишитесь на уведомления о самых актуальных новостях! ✖
главное
The Court Refused to Get Money from "Argumenty i Fakty" Because of the Photo of "Zhdun"
China to Take Countermeasures in Response to US Decision to Boycott Olympics
Poll: Most Russians have Not Flown by Plane in the Past Two - Three Years
Relations Between Russia and NATO Could Be Better, Danish Ambassador Said

OREANDA-NEWS. Sharp changes in the weather this winter could make it difficult for Dutch gas producer Nam to keep production from its Groningen field steady while sticking to the draft production plan of 24bn m³/yr.

Nam uses a flat production profile for the Groningen field, trying to distribute output "as evenly as possible over the months".

Adjusting offtake in a short period may exacerbate seismic activity in the region.

The Netherlands could ensure security of supply and meet export obligations for 90pc of the winter with flat production of 27bn m³/yr, the Dutch government has said.

Cutting output to 24bn m³/yr could result in more periods where Groningen production has to be turned up, which may contribute to more variable output.

Offtake of more than 24bn m³ is allowed to guarantee security of supply in the event of cold weather. Up to 6bn m³ more can be produced if needed because of cold weather and there is a 1.5bn m³ buffer that can be drawn upon if there are disruptions, such as constraints at quality conversion facilities.

The government suggested that heating degree days would have to be over 2,300 for some of the additional 6bn m³ to be used.

But Nam has criticised this part of the production plan, saying that the number of degree days over a gas year would only be known after it finishes.

The economy ministry would tell Nam how many heating degree days there have been by 15 October — two weeks after the end of the gas year.

If the start of the winter is cold then a strong draw on Groningen might be needed, but there would still be uncertainty about how many degree days there would be over the gas year, Nam said in response to the government's consultation on the draft production plan.

Quick Groningen production for sale — taking into account Norg gas storage facility stock movements — in October or November could require output from the field to be turned down later in the winter.

But this may require Groningen offtake to be reduced later in the winter during mild spells to try to keep within the 24bn m³/yr cap, which could conflict with Nam's starting position of keeping output as flat as possible throughout the year.

The uncertainty about the number of degree days could also result in problems being stored up for subsequent gas years, Nam said.

There could be situations where it becomes impossible to fill Norg during the summer while keeping within the heating degree day formula, Nam said.

This would be more likely in a gas year with highly variable weather, and would leave less Groningen production available for the following 12 months.

Nam has called for the economy ministry to provide more details on what processes should be followed and production changes permitted in exceptional circumstances. 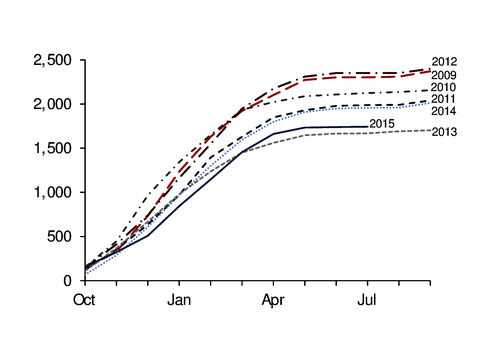 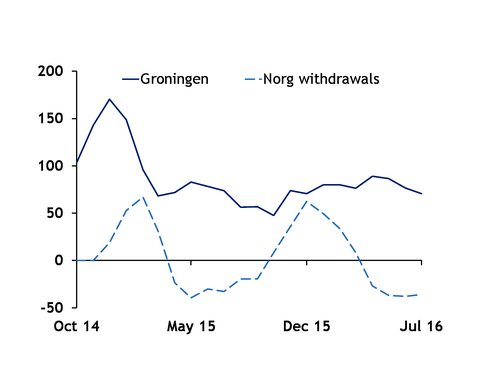 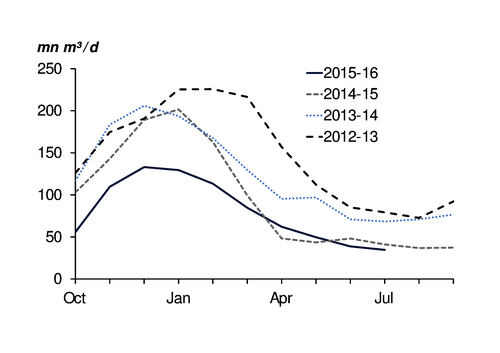