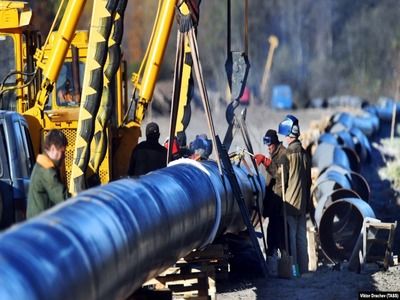 Fuel and energyOilIncidentsInternational activities
OREANDA-NEWS. At one of the sections of the Druzhba pipeline on the border of Belarus and Poland, new contamination of chlororganic oil with oil was recorded, according to Transneft. As told to "Vedomosti" in "Transneft", on June 19 at 15.00 point tests were made. They found an excess of organochlorine compounds of 60 ppm (parts per million). As a result, at 20.17, the transfer of the Mozyr-Adamovo oil pipeline to Poland was stopped.

In Transneft, they say that in June Russia didn't leave oil with organochlorine content above 1.5 ppm from Russia to Belarus at the Unecha-Mozyr section. The probable reason for the short-term increase in the concentration of organochlorine compounds in oil was the automatic activation of the drainage tank buildup system at the Belarusian Kobrin oil pumping station, suggest in Transneft, citing data from Belarusian colleagues.

The second point test was taken on the evening of June 19; according to its results, which were ready at 10.30 pm, the excess of organochlorine content in oil decreased to 4 ppm. At 8.37 on June 20, Poland resumed accepting Russian oil. Pumping from Transneft via the Unecha-Mozyr-2 trunk pipeline wasn't reduced at this time.

Russian oil Urals contaminated with organochlorine compounds was transported via the Druzhba pipeline to the Belarusian refinery in Mozyr on April 19. Poland and other countries have stopped pumping it. Belarus and Russia agreed that they will pump 1.3 million tons of polluted oil through their pipelines and will clear Druzhba by 10 June. Transneft stated that the pollution occurred as a result of oil supply fraud. According to the Ministry of Energy, the total damage amounted to about $ 100 million. The President of Belarus, Alexander Lukashenko, said that we are talking about losses of hundreds of millions of dollars.
Source: OREANDA-NEWS
Поделиться в соцсетях:
Подписаться на наши группы: Instagram | VK | Facebook | Twitter
Rate this article: