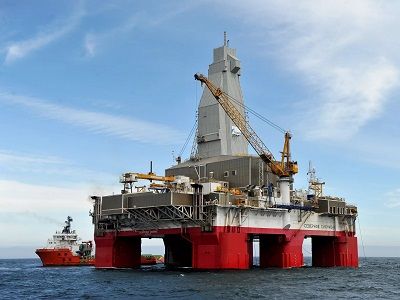 OREANDA-NEWS The state Commission on mineral reserves approved the hydrocarbon reserves of the Neptune field, located on the continental shelf in the sea of Okhotsk, told reporters the head of Gazprom Neft (MOEX: SIBN) Alexander Dyukov.

"Oil reserves amounted to 415.8 million tons in categories C1+C2, which is 1.6 times higher than the initial estimate," he said.

The Neptune field is located 55 km North-East of Sakhalin island, the sea depth above the field is 60-70 meters. Then its reserves were estimated at 250 million tons, and the peak of oil production — 5-6 million tons per year.

Based on the obtained results, a geological model was built and reserves were calculated. Core and fluid studies and interpretation of well geophysical data were performed.

Currently, Gazpromneft-Sakhalin continues construction of the second well at the Ayashsky site.

"The Neptune field has become one of Gazprom Neft's largest assets in terms of reserves. The Far East will be a new strategically important region of our activity for many years to come. It will allow the company to work more actively in the markets of the Asia-Pacific region. At the same time, Gazprom Neft continues exploration work on the license area of the Sakhalin shelf, our reserves in this region can still be increased," A. Dyukov noted.

In July, the Ministry of economic development published a report, which recorded an increase in mining., The mining index was 2.8% in June compared to 1.3% in May.

Oil on Sakhalin was discovered in the late 1870s, but the development of reserves began in the mid-20s of the last century. To date, ground-based hydrocarbon deposits are almost completely exhausted. However, back in the 1970s-1980s, the far Eastern sea exploration drilling expedition discovered more than three dozen oil and gas fields on the North —Eastern shelf of the island. To develop these fields in the last decade of the XX century, several projects were created under the General name "Sakhalin" and with serial numbers from 1 to 9. They were supposed to be developed by foreign investors and operators under production sharing agreements.