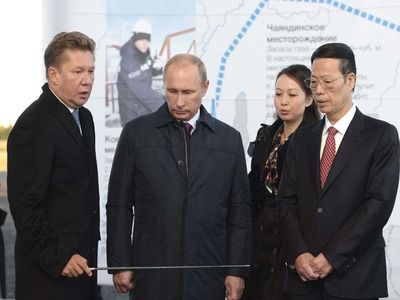 Fuel and energygasInternational activitiesOther transport activities
OREANDA-NEWS. In the near future, Gazprom plans to reach an agreement with China on the supply and price of additional gas volumes through the Power of Siberia gas pipeline, Deputy Chairman of the Board and CEO of Gazprom Export Elena Burmistrova told a press conference.

"China expresses extreme interest [in additional supplies]. The figure has not been finalized, and we have not agreed on the price. We expect such agreements in the near future and hope that we will be able to please with a potential increase in supplies via Power of Siberia," she said. The start date for deliveries on Power of Siberia remains the same - from December 1. The volume of initial deliveries will be 10 million cubic meters. m per day, told reporters the deputy chairman of the company Vitaly Markelov. "There will be an increase in volumes: now the first 10 million [cubic meters] per day, and then we will go further," he said, answering the question about the volume of supplies for Power of Siberia in 2020.

“The project is unique, built only on domestic technologies. On December 1, there will be gas supply, with which I congratulate everyone,” he added at a press conference. The agreement on the supply of Russian gas to China via the "Eastern" route (that is, via the Power of Siberia) between Gazprom and CNPC was signed on May 21, 2014. It involves the supply to the PRC of 38 billion cubic meters. m of gas per year.

Earlier, Oleg Aksyutin noted that within 15-16 years Gazprom plans to increase the production of "blue fuel" from 80 to 115 billion cubic meters. A representative of the Russian company said that by 2035 it is planned to export gas to China at such a level as to ensure up to 13 percent of Chinese gas consumption. Delivery time is agreed - 30 years. This is with annual deliveries of an average of 38 billion cubic meters.